Join the fight to end period poverty in our city!

If you’re visiting us for the first time, welcome! Over the past two years, we’ve been quietly and steadily helping locally based people who menstruate and working to end period poverty in Amsterdam.* To put it bluntly, we believe period poverty is unacceptable anywhere, but it’s perversely wrong in a city as wealthy as ours. While Amsterdam is viewed as a prosperous and progressive city, the reality is that we are also surrounded by deepening inequality.

The Netherlands currently has more billionaires than ever, while according to the municipality’s own poverty index the number of people under the poverty line has increased to 20% during 2020, a rate at least 6% above elsewhere in the Netherlands.  A 2019 survey by Dutch NGO Plan International indicates that nationwide, nearly 1 in 10 people who menstruate experience period poverty. That means an estimated 26,000 people in Amsterdam can’t afford period products. (Yes, you read that right.) So we’re getting a bit louder –and a lot more real–about what we’ve been up to and how you can join this fight.

We’ll be in the streets. Chances are good you’re reading this because you saw one of our posters, which will continue to pop up across town during December. It’s pretty simple: we believe that everyone who menstruates deserves to have safe, healthy periods–and that nobody should ever have to choose between tampons and food. With that in mind, we’re pushing a citywide conversation about this problem, and imagining how to get to a future Amsterdam where period products are free for everyone who needs them–and then we want to make that happen–together with you.

Why the focus on period poverty?

Period poverty is a type of poverty usually hidden from view, whether because of the stigma tied to menstruating, or the shame around being poor. (To find out more, check out our post on period poverty.) Just because we can’t see period poverty doesn’t mean it isn’t there, however, and those experiencing it deserve to have others fighting alongside them. Our focus is on feminist and anti-racist action; statistics show, over and over, that poverty as a whole in the Netherlands historically occurs at higher rates among people of color and women (especially single mothers).** By fighting and ending period poverty, we can make real inroads against racism and sexism.

To be clear, we believe that groups like ours shouldn’t have to exist in the first place–but the need is unfortunately all too real for some 26,000 people in Amsterdam. So until these needs are structurally met by those in positions of power, we will continue to fight.

Unfortunately, these Kits and Menstruation Stations meet only a tiny fraction of the actual need in Amsterdam. That’s why building awareness is so important. Basically, because we believe that having your period should never mean skipping meals or other basic needs, we’re making more noise this winter, so that more people know about this–and so there’s also more pressure for public health policies that fully address this need.

What you can do

Bottom line, the need is very present even if not very visible. Support from you–from your place of work–can make all the difference.  Let’s all get comfortable talking about period poverty whether with friends and colleagues, or local legislators, whether by tweet, or sharing our Insta and LinkedIn campaign posts, or having actual [masked!] face-to-face conversation. To that end, we’ve also made an easily downloadable infographic to help share some basic points with others.

Help us deliver more Dignity Kits and roll out more Menstruation Stations. Help us make a real dent in period poverty now, while we continue the fight for permanent solutions to a problem that shouldn’t exist. It takes a minute to donate here.

**See Dutch government report on poverty among people of color and joint governmental report led by Bureau Clara Wichmann on the economic and labor position of women in the Netherlands for more details. 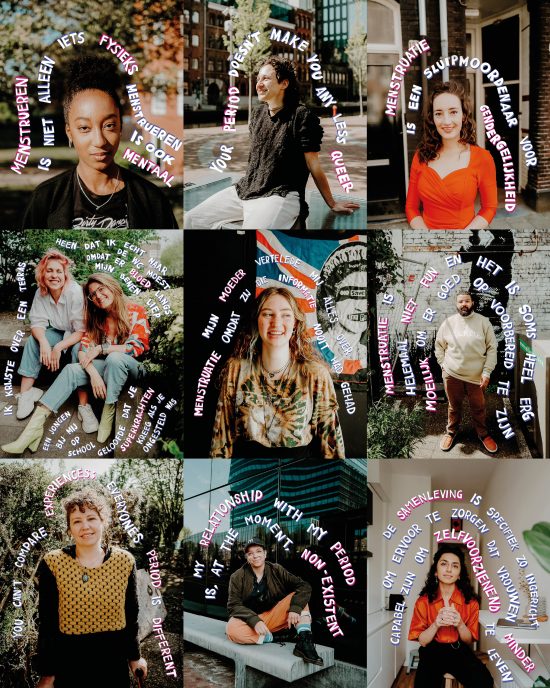